On New Year’s Eve, Mark and a group of friends joined a packed house at The Wiltern to watch Joe Rogan perform comedy live in LA. Joe’s opening act that night was the comic Ian Edwards and he did a bit on a topic that immediately resonated with us here at Procabulary.

Mark called me the next day and paraphrased a portion of Edwards’ act:

“Why is it called ‘the News’? That person was murdered, this country blew up that country, that person was sexually assaulted. It should be called ’the Bad News’ instead. Think about it, if you had a friend who showed up every night at 7pm constantly saying this kind of stuff, would you even let him in the door?”

No News Is Positive News?

Most of us already know how toxic “the Bad News” is and many of us have tuned it out entirely. Market share for major news networks had been steadily falling for decades before a certain ratings-driven President began to reverse the trend.

Yet between social media, water cooler talk, glancing at headlines while waiting for our lattes, we all eventually experience “the news” in one way or another. Before you say it, I know that there are many rational, logical reasons for staying connected with current events. I rationalize many of these arguments in my own head often.

The question remains: if we want to stay connected and “informed”, how do we do so without inundating ourselves with constant pain and sorrow? Mark and I postulated an idea:

Let’s try this in real time and see if it works. I’m going to pull up today’s (Jan 8, 2018) digital front page of the New York Times and translate some of their top headlines:

Congratulations, NY Times editors. You really amped up this one.

Endless War? Is it really? Will it end when, say, the current Attorney General passes away? Will it still be going on in the year 2133? Will Sessions’s uploaded Southern Conservative consciousness be our digital overlord for eternity? RELAX, NYTimes editors. Relax.

So that’s the translation (language) part. Now let’s do a story interpretation. If Sessions is engaged in an “Endless War” against something, by necessity there must exist some sort of opposing viewpoint or stance. Could the headline read “The fight for legalized cannabis continues” OR (less inflammatory, because THC users are generally chilled out folks)

TRANSLATION: “Legalized cannabis use continues its upward trajectory in spite of hurdles.”

Read that last sentence again and compare it to the one the Times ran with. Is it more accurate? Less accurate? Equally plausible? How are your stress levels? How do you feel?

Amazingly, the Times polled the world’s 7.6 Billion people yesterday and they all reported the same thing in response to Trump’s latest tweets: Disorder.

Put your feelings about the current President aside for a moment. This headline is a direct assault on your personal sanity.

If you actually read the article you’ll find that some Council on Foreign Policy suits and a few other spokespeople are upset with Trump’s erratic Twitter habits. Certainly the behavior could lead to something serious down the road. But to say “the world sees disorder” is an outright distortion using purposefully inflammatory language.

I’m typing this from a cafe right now in Bangkok, an international city full of Asians, Europeans, expats and tourists from around the globe. The people around me are talking about their new phones. Their startup businesses. Their kids. Where they’re going to eat tonight. Trump’s tweets? Nope.

Ok. Much more accurate. Much less stressful. Great. Next.

HEADLINE: “Mending Fences in the War Between Dingoes and Sheep”

I’m serious. This is one of the headlines. In the world’s most famous newspaper.

I clicked on the article expecting to read about a rogue squadron of Dingoes armed with AK-47s – slipping between fences under the cover of night as Sheep Special Forces plant landmines in lieu of an oncoming assault.

Nope. It’s simply a story about agriculture and livestock management. There are a dozens of way to translate this. I’m laughing too hard to do one myself at the moment.

HEADLINE: “We Have Fewer Crimes. So Do We Need Fewer Police?”

First line of the article: “Crime rates are at lows not seen in decades, but drug addiction and mental illness loom as persistent problems.”

Tell that to the Dingoes and Sheep.

In all seriousness, this is a heck of a way to interpret the very positive news of decades low crime rates.

TRANSLATION: “Crime Rates Lowest in Decades, How Do We Improve From Here?”

Fantastic. I’m on board. Next.

HEADLINE: “A Race to Photograph the City’s Disappearing Diners”

Way to highlight scarcity and loss! I was in New York last October. There were so many amazing new restaurants and cafes, it was simply overwhelming.

New businesses spring up, old ones go away. People live and they die (unless you’re Jeff Sessions wagging an Endless War on cannabis with your cyborg brain).

Tune Out, Tune In, Turn On

I’m sensing a pattern here. While I agree that staying informed can be a wise idea, I’m also sensitive to the fact that the way in which our news organizations relay their information could use a massive overhaul.

Keeping people fed is a good thing. Keeping them fed on a diet of dangerously (and unnecessarily) contaminated foods is something else entirely.

Our best advice: Find fair, positive sources of information, limit your exposure to the Bad News to as little as possible and mega-dose on yoga, meditation, personal development, time with loved ones, children, parents, friends, activities that enrich your life, whatever…

…because despite the fact of what the Bad News is telling us, this world is a pretty damn great place to be. Enjoy it everyone! 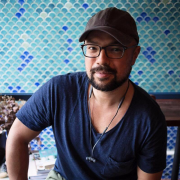 Adam Chin began working in the personal development field at the age of twenty-three apprenticing under Sales and Attitude guru Jeffrey Gitomer for over five years. He is a writer, photographer, videographer and co-founder of Procabulary.

This site uses Akismet to reduce spam. Learn how your comment data is processed.